Continue the story of Gurl and Bug (from The Wall and the Wing) with The Chaos King! In a city filled with wonders, one girl can do the most wonderful thing of all. Gurl is the one person who can disappear at will, but since she found her parents, she’s become The Richest Girl in the Universe. She may be special, but is she lucky? Her parents have forbidden her to vanish, her new school is full of snooty heiresses, she’s had a growth spurt that makes her as graceful as a grizzly, and her best friend in the world, a belligerent boy named Bug, seems to have abandoned her.

But adventure is just around the corner, as a madman who calls himself The Chaos King has Gurl and Bug in his sights. In their efforts to save themselves from his insane plans, Gurl and Bug discover some of the amazing secrets of the city they love. Their journey will lead them to confront a pack of blase vampires, a living lion of stone, a disgruntled teenage poet, a candy-loving sloth, The Second Richest Girl in the Universe, a fussy man named Mr. Fuss, and finally, the brink of the unimaginable. . . . 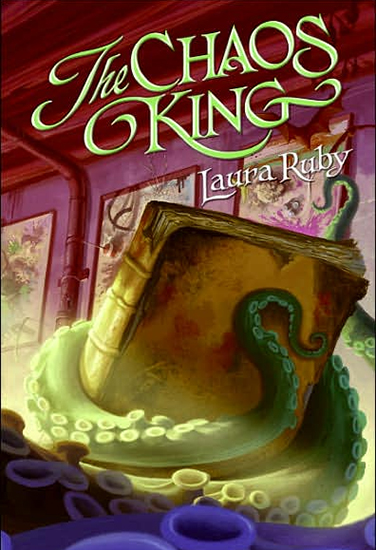 “Having read the first book isn’t required, but would be encouraged, as this is definitely a sequel in tone and style. Grand amusement for the hip and clever.”
—Kirkus Reviews

“In a time when teen fantasy novels proliferate, this series is an exceptional stand-out.”
—VOYA (Starred Review)

“…fresh and quirky, both amusing and emotionally taut. This is a rare treat: an update that requires little exposition and is nearly as memorable and ironic as its predecessor.”
—The Bulletin of the Center for Children’s Books

“The Chaos King is a wonderful story about how being different can be infinitely preferable to being ordinarily beautiful or talented, and Ruby’s off-the-wall writing style and infinite imagination make the lesson fun to learn.”
—Kliatt