The Story Behind the Story

THIRTEEN DOORWAYS is the story of two girls—Frankie, who is left at a Chicago orphanage during the Great Depression by her shoemaker father, and the narrator, who tells us Frankie’s story as she struggles to put together the pieces of her own short life that ended 25 years before Frankie’s.

But in order for you to understand why I wrote this book, I have to tell you about the real woman who inspired it, my late mother-in-law, Frances Ponzo Metro.

Fran was many things: a self-taught pianist, a painter, a cook, a waitress, a card-shark. But like the best poker players, she kept her cards close to the vest. I remember chatting over dinner at one of our early meetings, when she suddenly said something like, “At the orphanage, we would sneak into the kitchens when the nuns weren’t looking, steal an egg and suck out the insides.” And I said, “Orphanage? Nuns? Eggs? What?” And she’d said, “Want another meatball?” and dumped about five more on my plate (as Sicilians want to do). 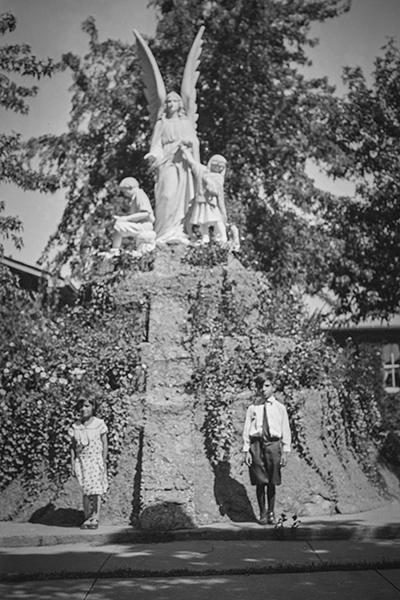 The angel statue centerpiece at AGO, c1933 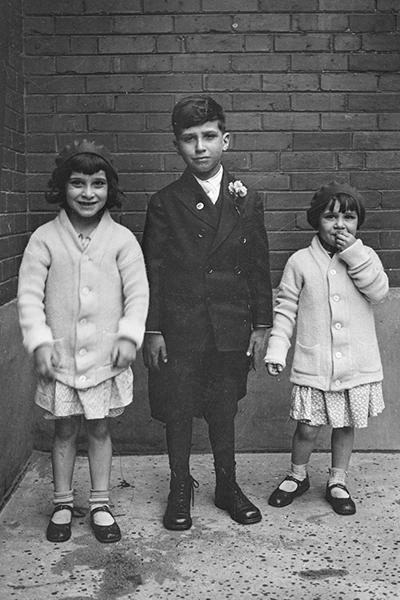 I had to ask an awful lot of questions to find out about the years she had spent at Angel Guardians Orphanage (AGO), a German Catholic orphanage in Chicago that was first established in 1865 and closed more than a hundred years later, in 1974.

Fran’s stories of her life at Angel Guardian during the depression and through World War II emerged as little snippets here and there. I learned that when Fran was three years old, she was told her mother died so she and her brother and sister were taken to the orphanage.

I learned that she was removed briefly by her father, and then put back into the orphanage when her father allegedly tried to commit suicide.

And I learned that, even after the suicide attempt, her father visited every other week on “Visiting Sundays.” We have the visitor’s logs, and we have tons of photographs documenting that time, most of them taken by Fran’s father with his Brownie camera.

I learned about the physical and emotional abuse Fran and her siblings endured at the orphanage, and about the fact that her father soon took her brother and the children of his second wife out of the orphanage but left Fran and her sister there till Fran was seventeen years old, and old enough to leave on her own.

Fran’s story had everything that inspires me as a writer: family secrets, terrible betrayals, wicked stepmothers, ferocious girls, romantic boys, angels and devils, love and death, and a dramatic plot befitting any fairy tale. 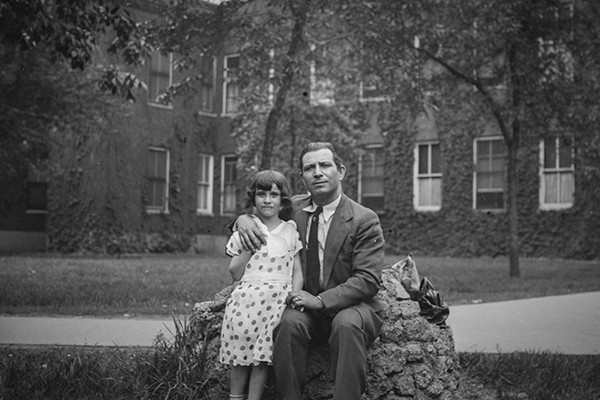 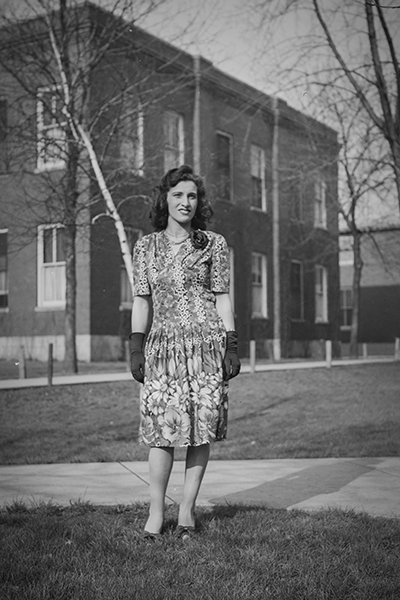 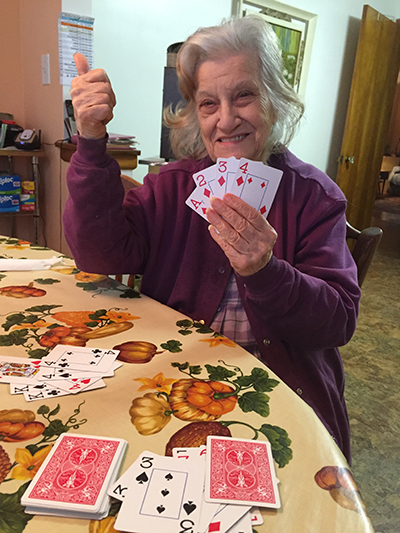 Yet Fran didn’t understand why I was so fascinated by her upbringing; to her, it was old news that she didn’t like to dwell on. But when I told her I wished to write a novel based on her teen years, she did the best she could to help me. She didn’t consider her own story to be worth much, but if I wanted to write about it, well, then, that was okay with her. “Ask whatever you want,” she’d say, while beating me at rummy. (If you played too slow, she’d slap the table and yell, “Come on, I’m losing money!”)

At the time I began writing this book, I had only one novel under my belt, and I had never written a historical novel before. I had no idea what I was getting into. Maybe that’s a good thing.

I interviewed Fran, her older brother Vito, her younger sister Toni, and her sister’s husband, Guy, also an Angel Guardian’s orphan. I also interviewed other orphans and watched videos of the children and facility available online. And I did a massive amount of research on the 20s, 30s and 40s, and then more research, and more research. Also! Have I mentioned the research? And the research into the research?

For more than ten years, I worked on this story, but I kept getting it wrong. My early drafts were these horrible first-person slogs that were like: OMG, ORPHANAGES ARE SCARY AND BAD AND SCARY. I had a historical novelist friend read a version, and she gave it back to me, saying, in the nicest way possible, “Maybe don’t show this to anyone else.” 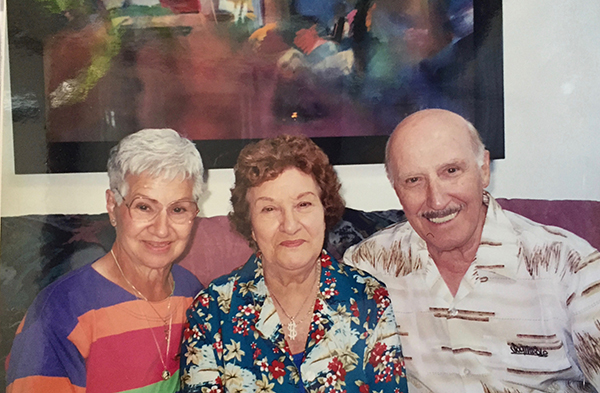 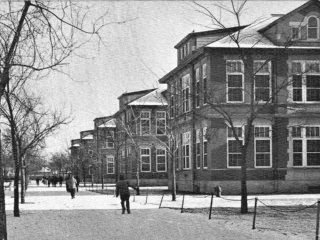 Boys and Girls cottages in AGO

It wasn’t until I understood that the orphanage, though a difficult place to grow up, was also a safe place in many ways. That the most painful betrayals were not those committed by strict nuns or priests, but rather the family that was supposed to cherish and protect you. That making your way in a world that thinks so little of you takes a particular kind of courage, a kind not always obvious from the outside.

And it wasn’t until I figured out that that maybe telling a straight historical novel from the point-of-view of one girl wasn’t the best way to get at the emotional truth of Fran’s experience. That maybe what I really needed to do was find a way to expand the story, crack it open wide, while still maintaining the connection to the real Fran and her early life.

Which is when I created my narrator, a ghost who died during WWI/the Spanish flu epidemic when she was just a teenager. Writing from the ghost’s point of view gave me so much more freedom to explore war and peace, poverty and privilege, “whiteness” and “darkness”. Who gets to be an angel in our society, who is painted a Jezebel? Who is cherished and who is disposable? Who is forgiven and who is damned?

THIRTEEN DOORWAYS is about justice. When I first started this project all the way back in 2002—yes, I said 2002—I thought it was common knowledge that the Holocaust was a horror. That Nazis were unequivocally evil. But we seem to have forgotten this. As the daughter of a Jewish man and as a human being, I am absolutely appalled by our short memories. But maybe I shouldn’t be surprised. In The Lathe of Heaven Ursula K. Le Guin wrote: “Love doesn’t just sit there, like a stone, it has to be made, like bread; remade all the time, made new.” Justice is like that as well. It has to be made and remade all the time, made new, otherwise, it withers and dies. The wolves are always at the door. 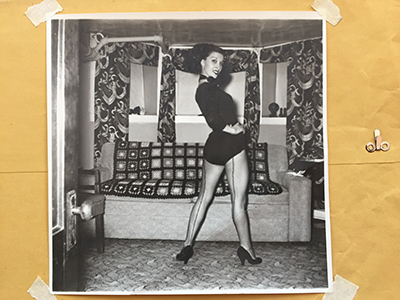 And, of course, THIRTEEN DOORWAYS wouldn’t be a book of mine unless I was able to blend elements from many genres: mystery, fantasy, fairy tales, folk tales, ghost stories, horror. And though it is rooted in fact, because it is also about the mutable nature of memory, my primary source was always Fran herself.

Frances Ponzo Metro was like many of us: an ordinary person who lived an extraordinary life in extraordinary times but didn’t consider it so. She read and approved an earlier version of this novel and I kept her up to date on my progress until her death in 2018. My only regret is that she never got a chance to hold the book in her hands.

As I say in my author’s note: Every word of THIRTEEN DOORWAYS, WOLVES BEHIND THEM ALL is fiction. And every word is true.

Other Inspiration Photos and Research 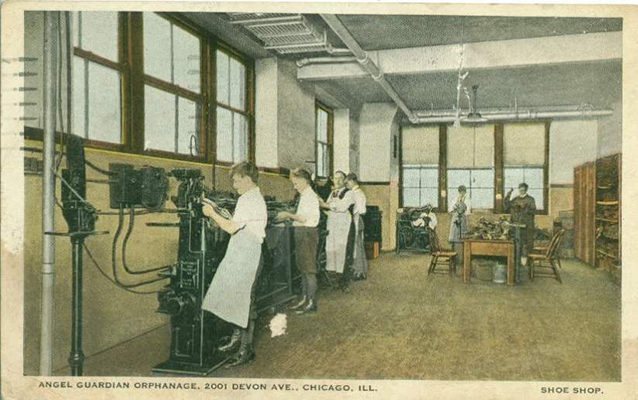 Shoemaker shop, one of the many trade-school workshops at AGO (postcard) 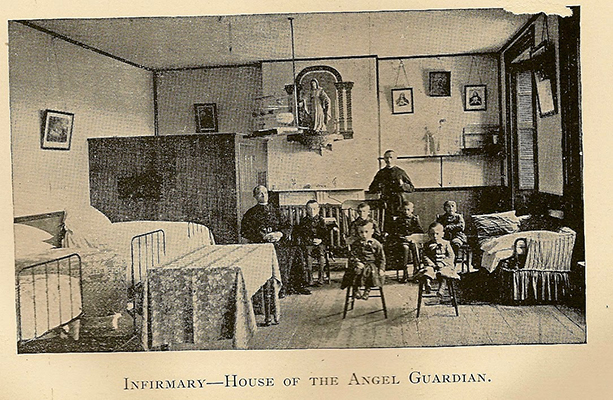 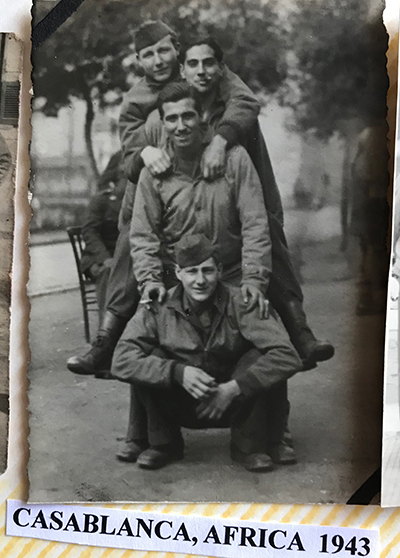 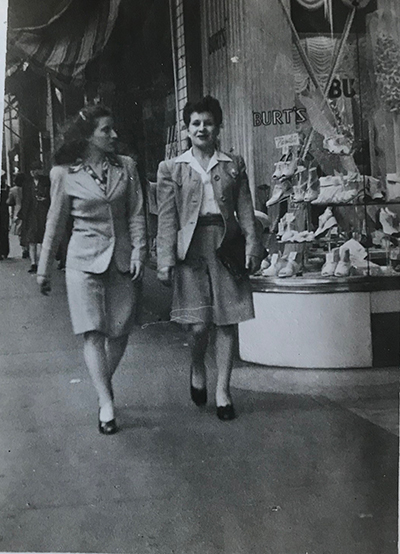 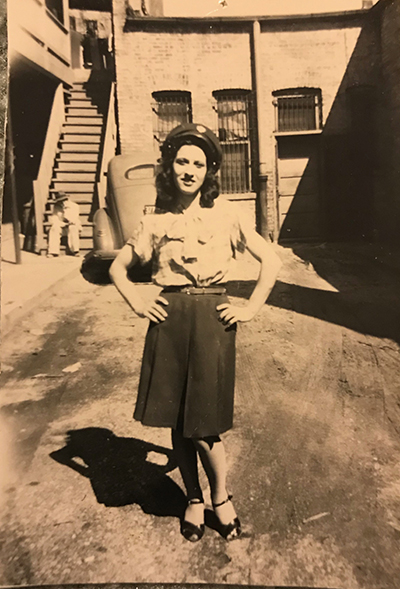 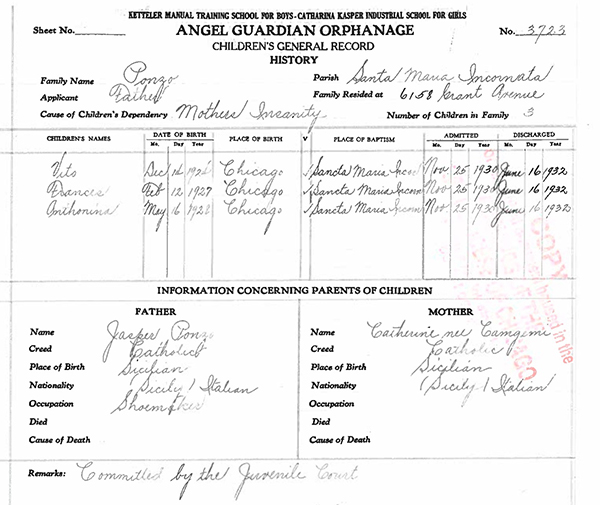 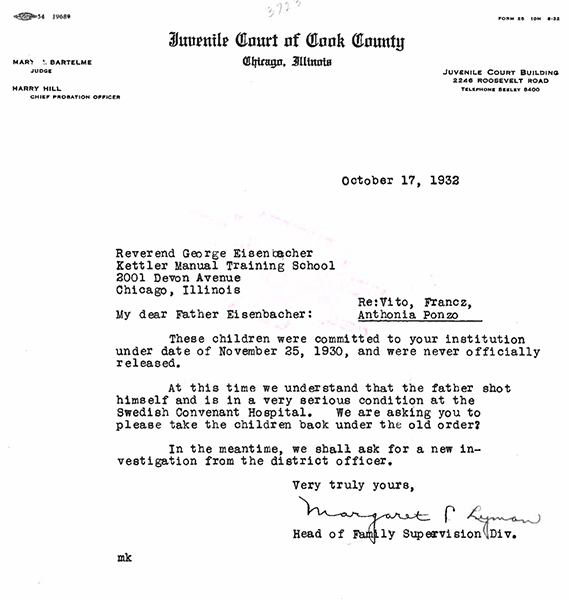 AGO record of father’s suicide attempt and readmission of children into AGO, 1932 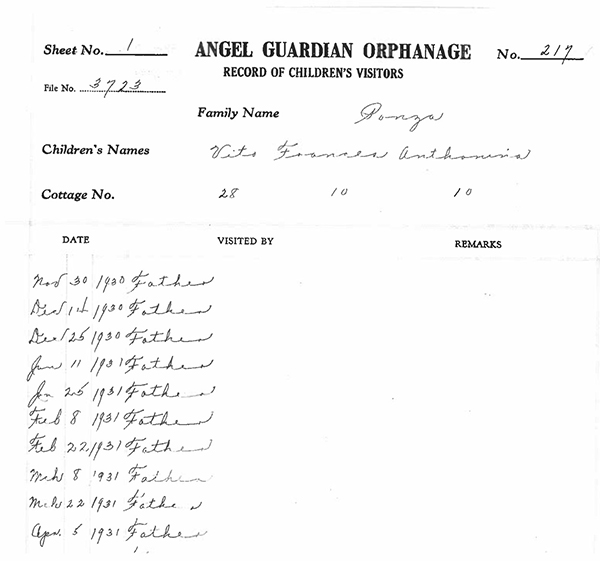 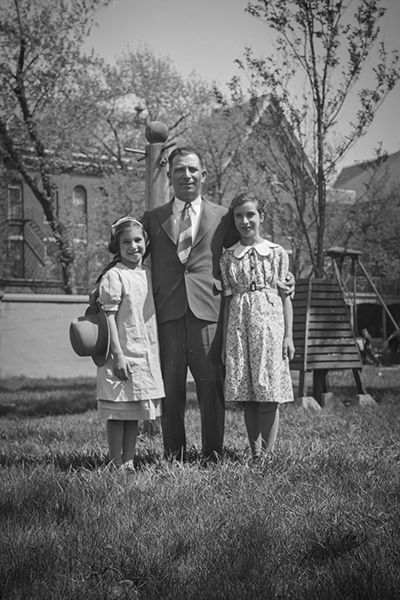 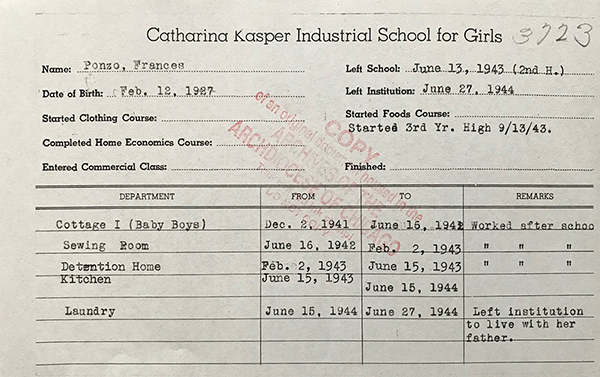 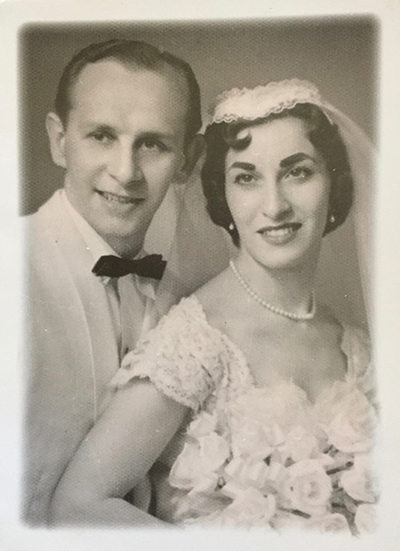