Thirteen-year-old Lily Crabtree is infuriated when she’s forced to move again after her mother’s break up with the latest loser boyfriend. Now they’re broke and they’ll have to spend the winter in Uncle Wes’s creepy summerhouse in Cape May, New Jersey.

And the place is crawling with ghosts.

From the spiteful teenager who mistakes Lily for her high school nemesis to the restless spirit of her eccentric Uncle Max, Lily is haunted by a host of unhappy phantoms. But why are they here? And what do they want?

With the help of her new friend, local boy Vaz, Lily tries to find out. But just as they are on the verge of piecing together the mystery, a casual family dinner turns into a beachfront showdown with guests both invited and unexpected, both corporal and supernatural. And the outcome is anything but certain. 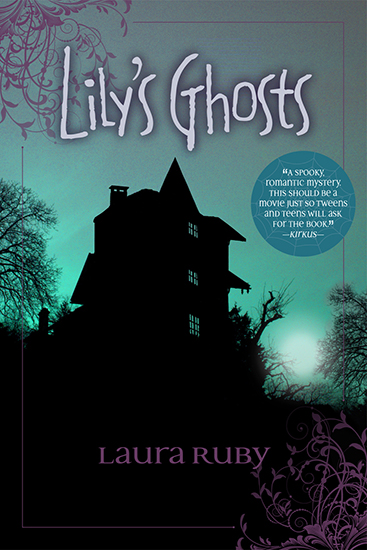 “This should be a movie just so tweens and teens will come ask for the book. Place it in their hands; they will likely thank you.”
—Kirkus Reviews

“A cast of eccentric characters plays out this intriguing story. Readers will be hooked right up to the surprising ending.”
—School Library Journal

“Readers will keep turning pages to get to the (surprise) ending, but also because they’ll be rooting for something good to happen to Lily.”
—Miami Herald

“Ruby doesn’t horrify so much as she insinuates in gracefully nuanced language that provides chilling support for the action. Make room for this first novel on the surefire ghost tale shelf.”
—The Bulletin of the Center for Children’s Books