The Wall and the Wing

Would you rather have the power of invisibility or the power to fly? Gurl longs to be able to fly like everyone else in the city, but late one night she finds out that she can do something better. She can turn herself invisible. But then she also discovers that her power is more interesting—and more dangerous—than flying ever could be. And that certain people will do anything to get to her.

In one vast and sparkling city, everyone can fly.

A few, nicknamed leadfeet, are sentenced by a trick of nature or fate to forever spend their lives closer to the ground. But one night, a girl named Gurl—a leadfoot, an orphan, a nobody—discovers that she can do something much better than fly.

She can become invisible.

This amazing power will help her uncover the secret mysteries of the city. But even with her newfound talent, Gurl can’t seem to hide from a giant rat man with a taste for cats, a manipulative matron with a penchant for plastic surgery, and a belligerent boy named Bug.

Gradually, Gurl learns to control her power and teams up with Bug to figure out who and what she is. Their quest will take them on a wild ride through this magical city, where they’ll confront chatty birds and mind-bending monkeys, an eccentric genius with a head full of grass and a pocket full of kittens, and the handsome but lethal Sweetcheeks Grabowski—the gangster who holds the key to Gurl’s past… and the world’s future.

Utterly odd, fully fantasical, and seriously hilarious, The Wall and the Wing is one fantasy that will leave you breathless and keep you guessing until the last page is turned. 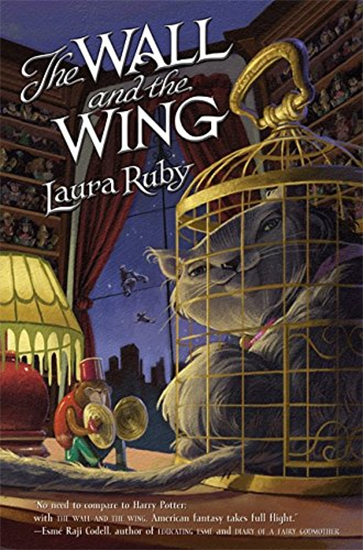 “Witty and ironic, Ruby’s sharp writing propels the story to an exhilarating climax that stops only an inch away from disaster and brings all the characters and their twisted tales together in an ending that seems only fitting for an over-the-top mystery adventure.”
—VOYA

“…rollicking adventure through a fantastical New York-like city…high-spirited romp.”
—The Bulletin of the Center for Children’s Books

“All of this fast-paced wackiness is told with humor, often black, that will have young readers giggling even as they cheer for Gurl and Bug…”
—School Library Journal

“…the next big thing in fantasy.”
—The Age (Australia)

“…a most engaging read.”
—The Bookseller (London)